Ape in the Balance. 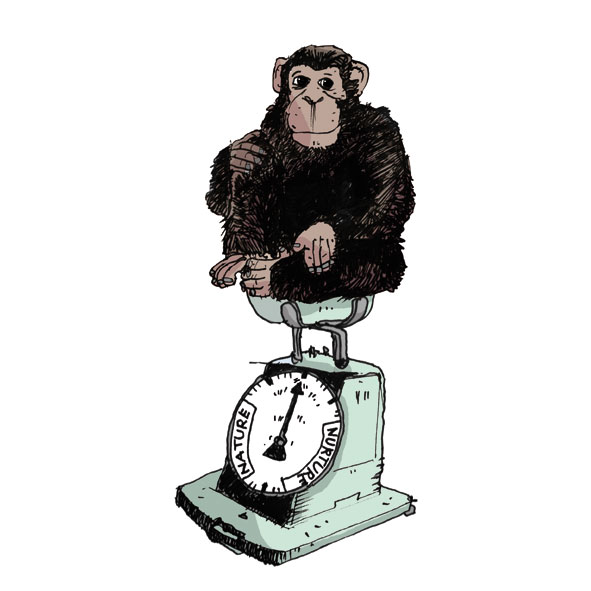 Sex and Gender are topics of perennial interest, but only in recent years have they moved out from under the covers into mainstream popular debate.

Feminism, sexism, homophobia, misogyny and alpha male sexuality were all shadow candidates in the recent US elections. Although Feminism did not win, the election outcome may have stirred the slumbering Big Beasts of the Second and Third Waves. In other news, Bruce Springsteen campaigned for transgender toilets, and almost all female actors are protesting the gender pay gap. Saudi Arabia is thinking about allowing women to drive. The Pope has given us the Joy of Love (Amoris Laetitia), and can forgive abortion but not homosexuality. After a short tenure as UN Ambassador, Wonder Woman retires. And more quietly, advances in medical technology continue to re-write the rules of human reproduction.

Despite all the noise have mind-sets really changed? Does the Noah’s Ark model of two of each still seem like common sense? Do Nature & Nurture know their place?
In addition to the myriad of voices on social media and elsewhere, there are two main groups who make it their business to talk, professionally, about Sex and Gender, though they do not always talk or listen to each other.

In the Nature corner we have experts in the biomedical sciences whose vocabulary revolves around genes, hormones, and chromosomes. And in the Nurture corner we have varieties of feminists, masculinities activists, and armies of gender and development specialists, whose stock in trade tends towards stereotyping, discrimination, and empowerment.

Individuals under the LGBT umbrella and outside the heterosexual boxes , are variously concerned with both Nature and Nurture though there is little consensus.

Specialists, and activists, by definition, plough a narrow furrow, not necessarily having or seeking information from parallel fields. Academic and other training courses tend to treat one element in detail, focussing perhaps on the evolution of feminism, or analysis of gender bias in national budgets. And not all medical training involves a thorough grounding in relevant gender and other socio-cultural concerns.

That having been said, there have been several recent attempts from the biomedical side to popularize their knowledge. Though it is striking that scientific findings about body and brain are still often explained by evolutionary speculation – Woman in cave, babies at breast, with occasional foray for herbs and berries; risk-taking Man, with his high pain threshold surging across the plain, spear in hand. It seems that many women have a wider range of thumb-joint movement, allegedly as a result of their archetypal occupations, which predisposes them today to arthritic thumbs. Women are said to have better communication and care-giving skills, and more acute colour vision stemming from the need to identify those berries and herbs, and to share that knowledge, cooperatively, with the other girls.

Evolutionary theorizing demonstrates that scientists are human too and that it is hard to escape cultural stereotypes. We will probably never know whether a particular speculation is true or not, and scientists, being human, differ amongst themselves. In addition such speculations can easily be turned upside down. Having babies is generally thought to be painful and risk-taking , isn’t it? And doesn’t the hunter require strong and flexible spear-throwing thumbs, keen eyesight to spot those camouflaged beasts, and the ability to communicate and coordinate with fellow hunters in pursuit of the big ones?

One of the most speculative of recent speculations attributes the lack of bone in the human male penis to the fact that the sexual encounter can be very brief because of the monogamous nature of our species. This is taken to mean that men do not have rivals to worry about, though the argument could equally be made that brief encounters allow time for more of them, for both women and men. So not monogamous, but polyandrous and polygynous then?

Nevertheless, evolutionary speculation can be useful if it actually leads us to question whether the primordial capacities identified, usually, caring versus risk-taking, need to be allocated by gender, and whether they still retain their presumed original weight and relevance.

Most of this current crop of medical popularisers has not abandoned a clear hierarchy of power, even though women are sometimes now envisaged to be coming out on top. And even where it is recognized that a clear division between XX and XY individuals is an oversimplification of the basic recipe, there has been little attempt to present a coherent world view embracing LGBT.

Feminists and gender experts on the other hand tend to ignore debate about physiological and biological differences, on the assumption that this would inevitably lead to discussions about the “essential” nature of differences between men and women, which are often regarded as unhelpful to the basic project of changing the social, economic and political order.

One of the consequences of denying the inconvenient truth of the body is that feminists may struggle to deal with the fact that only women have babies. Women are still urged to “lean in” to a man’s world but there is no comparable emphasis on men’s leaning into the “caring” economy, by for example exercising their rights to parental leave where these exist. And expert arguments for equalizing numbers of women and men in decision-making bodies can only be justified with reference to different life- experience based on allegedly “essential” differences. The majority of experts and activists in the Nature corner have also yet to find a place in their cosmos for the non-hetero-normative.

What are other consequences of the lack of cross-fertilization between experts? Often different experts reach opposite conclusions on the same issue, for example in pronouncing on which sex is “in charge” of the mating strategy. Scientists on the medical side, extrapolating from the fact that women have a limited fertility life-span and the major responsibility for child care, consider that women must therefore be directing the process of mate selection. The equation is made that because women have more to lose they must be in the driving seat. We will never know whether this was the case in some earlier evolutionary phase, though it may be true in other species usually cited, such as the Bird of Paradise, where males indulge in a hysterical display to engage female attention.

Contemporary social scientists, however, see women’s lack of social power, shown inter alia in general disapproval of women who are unattached to men, as placing them in a weaker bargaining position in the mating game. It is also true that as women gain in socio-economic power their interest in marriage normally declines.

Lack of cross-fertilization between disciplines has meant that medical research has ignored or underplayed the spectrum of gender differences in testing of medicines and treatment of illnesses – usually taking men as the default position – with often unfortunate consequences. It is also generally recognized that the function and effects of testosterone (“the male hormone”) in women has been under-researched and little understood.

At the same time there are glimmers of light. “Systems- biology” thinking is unpicking the old certainties of XX/XY, and the fields of epigenetics, and gender medicine open interesting possibilities for collaboration between disciplines, as well as for elimination of current levels of discrimination based on old ideas about simple binary differences.

Ape in the Balance brings together, for students, in the broadest sense of that term, the current theory and debate, from biomedical and social sciences, and from popular debate.

At the risk of being accused of West-Wash Ape in the Balance draws primarily on sources from the English-speaking world though examples and cases are more widely sourced. Although most other countries have been touched by their engagement with Western Feminism, and Gender and Development, either within the old framework of colonialism, or the newer framework of international development, many countries have a distinctive profile and the Ape in the Balance approach could usefully be applied in other countries and regions, including those where binarism has never really caught on, though there may be traces of contamination by association!

The early chapters introduce our main actors–Sex, Gender and Sexuality- and examine the meanings they have for different social and professional groups. Questions are raised as to whether the continuing grip of dualistic thinking is underpinned or undermined by current scientific research, and real- life experience of social diversity.

Chapter Two reviews the attempts by different elements and interest groups to change the hand they feel society has dealt them. And the following pages are dedicated to the exploration of the different ways in which technology is re-writing reproduction, and re-assigning sex and gender. The remaining chapters address three important dimensions of the current debate ; the impact of different economic systems and contexts on gender equality and vice versa; the changing rate and incidence of gender-based violence as an expression of social power; and last but not least the use and misuse of communication media of all kinds to address inequality and difference.

Unlike many recent books in the field, Ape in the Balance does not seek to assert the superiority of one Sex or Gender or Sexual Preference over another, or others. It does not aim to replace misogyny with misandry (tellingly, a little known word!); or to substitute homophobia and transphobia with heterophobia. Rather this publication aims to show both the pervasiveness, and essential pointlessness, of such discriminations and to confirm that “Nature or Nurture?” is no longer a valid question. Our optimistic founding principle is that knowledge breeds tolerance, and even enjoyment, of the replacement of discrimination by diversity.

The case for maintaining binary divisions and inequalities of sex and gender can only be made by closing one’s eyes to medical, social and technological advances, though they remain a potent metaphor for unequal power and, along with other types of diversity, are still strongly supported by “conservative” social forces, religious, military, political, economic and even medical.

Differences of Sex, Gender and Sexuality undoubtedly exist and will remain fascinating to most people. We are unlikely, ever, to achieve the nonchalance of some of the lower orders– snails, water fleas, flatworms, limpets, gobies, clownfish, cuttlefish, some birds, hyenas and varieties of frogs, to name but a few who appear to change sex and gender without a second thought. But we should be smart enough to question whether differences of Sex, Gender and Sexuality should continue to be given unequal moral, ethical, political, legal, economic and social weight. Dare we hope that the unprecedented interest in this topic indicates that we are on the cusp of a change of minds? Perhaps our funny old world is queerer than we think?