Are you my mother ? 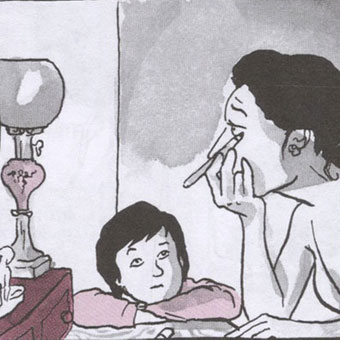 If so, you could do much worse than to start with Are You My Mother?… the second book in a diptych by Alison Bechdel which explores her fraught relationship with her mother in the hope and expectation of finally becoming herself.

The English-speaking world …unlike the French or the Japanese… has traditionally not taken comics seriously but all the signs are that this is about to change with some graphic novels competing with literary heavy-weights for serious prizes. Two graphic novels have been shortlisted in the Costa Book Awards one an 80-page line-drawn story about a teenager’s holiday with his mother by Joff Winterhart entitled Days of the Bagnold Summer which is competing with Hilary Mantel’s 400-page Man Booker winning Bring Up the Bodies. Another in the biography category by Mary and Bryan Talbot entitled Dotter of Her Father’s Eyes is a biography of James Joyce’s daughter referencing Mary Talbot’s relationship with her own father which is in competition with Artemis Cooper’s massive biography of Patrick Leigh Fermor.

http://www.dailymail.co.uk/news/article-2236249/Costa-Book-Awards-2012-nominees-Two-graphic-novels-listed-list-revealed.html
Graphic novels it seems are inherently suited to exploring convoluted family relationships in an economical and witty way and to teasing out literary parallels with one’s own situation though there may also be an element of copy-catism? Certainly Dotter of Her Father’s Eyes appears to owe an enormous debt to Alison Bechdel.
The graphic novel genre has form when it comes to discussion of gender. Probably the first of these to enter the mainstream consciousness was Marjane Satrapi’s Persepolis first published in France in 2000 to wide critical acclaim and described as ‘a wise, funny and heartbreaking memoir’ of a young girl from a progressive and intellectual family growing up in Iran during the Islamic Revolution ,with all that entailed for restrictions on women’s freedom.

http://www.bookslut.com/fiction/2003_08_000395.php
The creator of Are You My Mother… Alison Bechdel… has been practising her comic art since the 1980s when she started to develop what became a long-running comic strip entitled Dykes to Watch Out For.

The so-called Bechdel Test was developed in this context and is used to identify gender bias in media. A work passes the test if it features at least two women who talk to each other about something other than a man. Commentators have noted that a great proportion of contemporary works fail to pass this test.

http://bechdeltest.com/
Alison Bechdel is an engaging character who has declared that “The secret subversive goal of my work is to show that women, not just lesbians, are regular human beings.” Many people could relate to that.
The first part of her award-winning diptych Fun Home: A Family TragiComic.

http://dykestowatchoutfor.com/fun-home-2 was published in 2006 and was named by Time magazine as one of its ‘10 Best Books of the Year’. Reviewers described Fun Home as ‘the unlikeliest literary success of 2006,” and called it “a stunning memoir about a girl growing up in a small town with her cryptic, perfectionist dad and slowly realizing that a) she is gay and b) he is too. … Bechdel’s breathtakingly smart commentary duets with eloquent line drawings. Forget genre and sexual orientation: this is a masterpiece about two people who live in the same house but different worlds, and their mysterious debts to each other.’

Fun Home despite its darkish subject matter –revelation of her father’s secret history of homosexual affairs may have been behind his apparent traffic accident…is visually very rich given her father’s expressing himself through lavish interior decoration of the family’s enormous Victorian house which is also a funeral parlour. He is both a high school English teacher and a funeral home director.

The central problem of her most ambitious work Are You My Mother is to find a way of obtaining recognition and acknowledgment from her mother so that she is free to be herself as a lesbian and as a writer, in particular as an auto-biographer (her mother, who is still living, cannot understand ‘why everyone has to write about themselves’). This central relationship is explored against a background of Bechdel’s childhood, her love affairs, her interaction with two therapists and the drawing of ‘crafty symbolic parallels’ with some of her heroes and heroines…amongst them Freud, Virginia Wolf, Sylvia Plath and the British psychoanalyst D.W. Winnicott who formulated the concept of the ‘good enough’ mother.

http://www.guardian.co.uk/books/2012/may/24/are-you-my-mother-alison-bechdel-review
Bechdel has embraced the comic novel genre for her sometimes gothic and highly intimate autobiographical explorations as being an inherently subversive medium and therefore suitable to someone who feels themselves outside the normal adult world.

As any devotee of Tin Tin knows, (and Bechdel looks like Tin Tin) comics lend themselves to mimetic display of dramatic wordless action; the eyebrows raised and the mouth open in dismay, horror, grief, mad laughter and accompanied by a full range of body language; drooping shoulders, double-takes, speedy exits, slammed doors, falling down etc.

As Bechdel brilliantly shows the format also permits …through word bubbles, thought bubbles, streams of connection with her own memories, and literary and psychoanalytic influences…. the most economic simultaneous depiction of current action, interior monologue, and ideas across time and geographical boundaries. For example, in frames where Alison is chatting to her mother on the phone at home…usually trying to extract some understanding, reassurance or shared interpretation of their past… the bubbles and panels may be channelling Virginia Wolf and the psycho-analyst Winnicott crossing paths in Tavistock Square in London, as well as musing on something she is currently reading or her mother’s unfinished life as an actress.

This is not an easy read and has been described as having ‘too much therapy’ but if you are ready for the ride it is a mind-blowing experience. Don’t say: comics are just for kids.
Do say: this exciting way of presenting complex material may not yet push regular literature off the shelf; and when will Mrs Bechdel change her mind about memoirs.