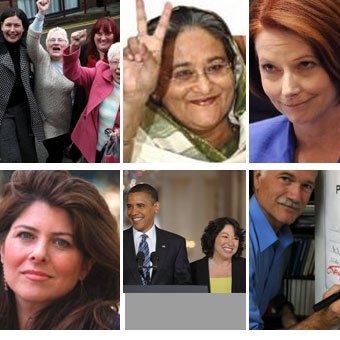 The Mumsnet Poll on Feminism scorned by many as being unscientific and unrepresentative….suggested inter alia that ‘feminism’ has an image problem. This perhaps unsurprising insight has nonetheless renewed the debate on what is modern feminism about. The Mumsnet Poll also revealed that only one in seven among those 1,300 polled self-identified as a feminist despite espousing the causes of feminism. The reasons for rejecting the feminist label, many proposed with tongues-in-cheeks, were, again, not totally unexpected. Feminists were stereotypically; ‘shouty’, hairy-legged, man-haters; dungaree-clad, cat-loving & Saphist. And despite some interviewees & commentators saying all of that sounded perfectly fine to them, there seemed to be an underlying concern that to call oneself a feminist was to seriously threaten claims to sexual attractiveness and social viability.

Independently, in another recent study fear of being seen as ‘feminist’ (or alternatively ‘gay’) was raised as the reason why few men take gender studies courses in university.

Sheik Hasina, Prime Minister of Bangladesh, flashes a victory sign Do women leaders bring always feminism to the top table? Widely campaigned against by feminist groups globally for her actions against Nobel prize winner Mohammed Yunus founder of the Grameen Bank for rural women. Nevertheless under her watch several reservations on the Convention for the Elimination of All Forms of Discrimination against Women (CEDAW) have been removed, and she has strongly supported equal property rights for women, and women’s sport. Conversely the conservative opposition with whom Yunus is associated took many anti-egalitarian measures when they were in power. Whilst he is lauded abroad his constituency at home has not been able to mobilize effectively to support him.