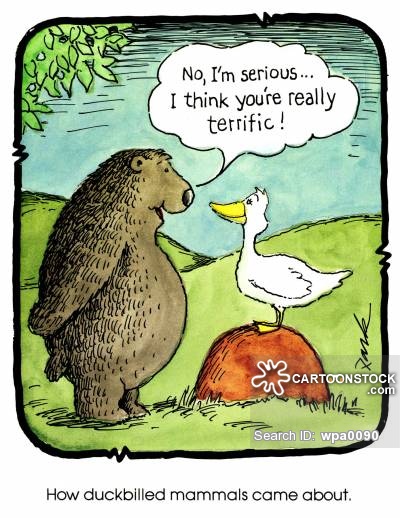 What do the Duck-billed Platypus (1) and the retail guru,Mary Portas (2) have in common, you may well ask. The answer is that both have defied the categories Normal/Abnormal that society routinely imposes.

It has taken scientists more than 200 years to agree (more or less) on the taxonomy of the DbP. In 1799 the first specimen to receive scientific attention was believed to be a hoax; naturalists in those days liked to play geeky (male?) pranks by sewing bits of different animals together to challenge each others’ taxonomic skills. The Duck-billed Platypus is a hairy warm-blooded creature that lays eggs. The male platypus has ten sex chromosomes (XYXYXYXYXY) instead of the two “normal” for a mammal. Not being categorized for 200 years appears not to have done the Platypus any harm…apart from becoming the butt of some moderately amusing cartoons on cross-species marriage – often a beaver and a duck.

A more recent category challenge was launched Mary Portas, and her wife, Melanie Rickey who, proclaiming themselves the New Normal , revealed that the sperm donor for their baby was Ms Portas’ brother (3). Has this rocked social anthropology to its foundations?

As students of anthropology know too well the study of kinship systems requires serious attention to the effort societies make to ensure that there is no confusion between blood relatives and actual and potential affinal relatives with whom to marry and mate . Not Us (NU) are the only Possible Mates (PM)(4). This avoidance of marriage between kin has of course various overt and covert purposes: the family strengthens its social and political outreach (remember Edmund Leach & those Kachin gongs(5)); families and societies avoid in-breeding and the possibility of replication of rogue genes; there is importantly no confusion of categories.

It is a letter of anthropological law that mother’s brother (MoBro) should not also be father (Fa) but when technology has already re-written reproduction and parenthood to make them independent of heterosexual intercourse do all those kinship charts, incest taboos and clan totems still matter?

It remains to be seen whether same-sex couple’s use of a sibling sperm donor will become a “normal” way to create and ensure a new type of family unit; and whether of course Portas and Rickey will have a second child with Mr Newton.

One fertility clinic in the UK reports seeing a sibling sperm donor case about once per month.A case of better the donor you know…?

If the very engaging Horatio (Newton/Portas/Rickey) were an anthropologist a major preoccupation could be how he should address his MoBro/Fa but as far as we know this has not arisen. Maybe time to stick with first names anyway and avoid category error .

Also in the news are various reflections on the T in GLBT or (the sometimes presumed to be more feminist version) LGBT.A recent article on Stonewall’s “belated but extremely welcome embrace of trans rights” reminds us there has often been Trouble in the LGBT paradise with transgender people not getting the credit they deserve for successful political activism (6). The article begins, “Why should lesbians, gays and bi-sexuals stand together with trans people? ‘Because we get beaten up by the same people!’ Sometimes the best explanations are the simplest”.

Having a common enemy can be a very powerful reason for solidarity of course though the T can be seen as reasserting gender binary rather than challenging it. In his Granta article Self-Made Man Mark Gevisser writes “Some of my own older butch lesbian friends like to joke, with only semi-mock horror, that the new transgender movement is rendering them a dying breed” (7).

Transgenderism, particularly where it involves medical and/or surgical intervention also challenges the cherished feminist belief that gender is “only” socially-constructed.

We have already met the Trans Exclusionary Radical Feminists (TERF)(8) who consider that transwomen have not paid sufficient dues in order be in the club with women-born-women; and perhaps there are Heterosexual Men (HM ?-sorry, Your Majesty) who feel the same about transmen claiming patriarchal privileges, or claiming to be male feminists.

Whilst there is a strong case to be made for the social and political validity of GLBT/LGBT and some of its simpler expansions there does seem to be a point where the parsing of differences merely indicates -hurrah!- the widest spectrum of possibilities .

Proliferation and re-ordering of initials for example LGBTQQIAAP or QUILTBAG (9) is of course very educational to those who know or bother to find out what the various new variants mean, but questionable as an expression of group identity.

What is more, if there are so many variants on the Heterosexual Norm it may begin to raise questions as to what is really the Norm & who is left in there. And let’s not forget that women-born-women are also discriminated against in all spheres of life..recently the sexist chanting against women footballers is hitting the news.

If the only people who are not discriminated against are Heterosexual Men doesn’t this make them the New Abnormal?

And just when it’s all becoming too complicated Science comes to the rescue (again), raising (again) the issue that what are popularly considered scientific certainties and norms are far from the case: “the XX/XY model of chromosomal sex…(is) founded on faulty premises and reflects and perpetuates reductive, essentialist thinking. While the scientific world has moved on, its popular appeal remains” (10).

The article discusses how “existing sex and gender stereotypes were projected onto chromosomes by early researchers” in turn creating and reinforcing popular stereotypes.

However, “the idea of binary sex hormones seized the public imagination and became a node through which ideas were exchanged between scientific theory and cultural norms ideologies and expectations”.

Gendercentric remains to be convinced that all scientists have transcended old-fashioned thinking but perhaps the real importance of this article is to recognize that we still need much more routine inter-disciplinary communication and exchange, as well as some new nodes through which to exchange ideas..

And whilst we are about it maybe a revision of the karyotype (11) presentation of a person’s chromosomes which show the “sex chromosomes ” as a little isolated island shoved off to the right would be a good way of expressing the new scientific enlightenment.

And a topic for another day….are gender experts and gender studies courses sufficiently interdisciplinary or more like the sex chromosomes in the karotype…

Perhaps we should all become more careful about our propensity for unregulated invention of acronyms and initialisms; and constantly interrogate those already established?

The “field” of gender may be particularly prone to the invention of …dare we say it …unnecessary…acronyms which often indicate funding source and international agency turf rather than encapsulating a distinct phenomenon. A brief survey of the acronym lists at the beginning of a random sample of development reports would corroborate this.

How many people would otherwise know would know that GE (12) stands for gender equality as well as General Electric or GM for gender mainstreaming as well as General Motors, or GEWE stands for… (original research is required here, dear reader!)?… and we’d better not start on the rich and often disputed field of associated violence (GBV, SGBV, CRSV,VAWG etc)…some of the disputes relating to whether violence can be perpetrated by women on men, or how same-sex violence should be classified, as well as indicating agency mandate.

We need to recognize acronyms for what they are… a sometimes convenient shorthand for those who know the code…rather than being a permanent phenomenon. When changing political or scientific circumstances mean that an acronym or classification system doesn’t fit, it should be changed.

Though scientists think they now know the probable evolution of the Duck-billed Platypus, with his ten sex chromosomes & other mutually “incompatible” traits he is still hard to pin down; and a change in reproductive technology and marriage norms has enabled Mary Portas and others to use their male sibling as a sperm donor without breaking the incest taboo, and should give the experts in kinship terminology  reason to reflect.

P.S.  Examples of your favourite unnecessary acronyms will be gratefully received

(9) LGBTTQQIAAP (Lesbian, Gay, Bisexual, Transgender, Transsexual, Queer, Questioning, Intersex, Asexual, Ally, Panssexual; such initialisms are sometimes criticized for being confusing and leaving some people out, as well as raising issues of placement of the letters within the new title. Or QUILTBAG (Queer and Questioning, Intersex, Lesbian, Transgender and Transsexual and Two-Spirit, Bisexual, Asexual and Ally, and Gay and Genderqueer).

(11) A karyotype is a picture of a person’s chromosomes.

(12)Properly speaking an initialism rather than an acronym.An acronym is an abbreviation formed from the initial components in a phrase or a word. For the purist an acronym is distinguishable from an initialism by the fact that it can be spoken as a word e.g. NATO, Benelux