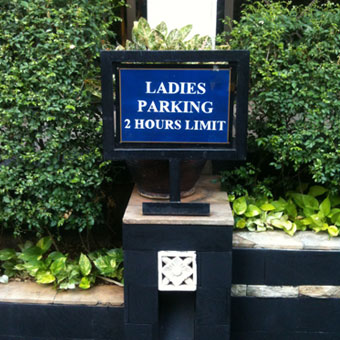 Any doubters can be reassured on this point by entering ‘women drivers’ on Google Images.

Last year the UK Driving Standards agency released figures… disaggregated by gender …. showing that during driving tests women were undone by their parallel parking; whereas men were marked down for – more dashingly – moving off too fast and jumping traffic lights. The pass rate for men was higher and they needed fewer hours of lessons.

Are these differences due to ‘hard-wiring’; or the pressure of stereotypes; or a bit of both?

In a UK study some women said that their breasts interfered with their ability to look over their shoulders whilst parking. Perhaps having a bunch of (probably) male driving instructors snickering behind their hands may also not have helped? There have also been studies that seem to show innate differences in spatial awareness between men and women.

For a young man, does knowing that you are supposed to be testosterone -charged oblige you to demonstrate that condition by driving recklessly; or are these primal urges simply too strong to resist?

There is no shortage of shifting and contradictory nature and nurture arguments to explain how men and women are supposed to drive.

Either way, the European Court of Justice ruled in March last year that insurers can no longer use a customer’s gender to calculate the driver’s insurance premium. Traditionally risk- prone young males (a condition which seems to last until they are 40) have paid much higher premiums than women in the same age group; only once they both reach the magical fifth decade do premiums get lower for men, and become roughly equal between the sexes.

Whilst the new ruling on gender equality will not affect middle-aged drivers (f/m) it is widely assumed that younger women will have to pay more, whilst young men may pay less. Women over fifty may also pay less though they are often assumed to be less experienced (having let their husband do the driving) and therefore more dangerous.

Insurers seem be arguing that as they will still need to cover those dangerous young men then they will have to round upwards the rates for women rather than splitting the difference. The Association of British Insurers (ABI) estimates that premiums for men will fall by up to 10% but rise for women by up to 25%. Gender-based pricing is most common in the UK, Spain and Ireland.

Last year’s announcement of the ruling, which is due to come into force after 21/12/2012, gave rise to some muted whispers of a feminist backlash . It could of course be argued that whilst the largest number of serious accidents are still caused and experienced by young men, they are a minority amongst their peers who drive safely and cautiously … just like a woman in fact. And conversely that there are many young women who defy the stereotype.
In short it seems that sex and/or gender was never a good basis for determining car insurance premiums.

As this new ruling reflects growing recognition of gender equality it will also be interesting to see what its impact might be. Will more young women roar through the red light shouting ‘What the hell!’ and more young men allow themselves an additional precious 20 seconds to parallel park?
And we’re afraid that street signs disaggregated by gender will just have to go. It’s assumed that the sign above refers to how long ladies can stay rather than the time allowed to get into position. (Suggested captions are welcome)

Hopefully this ruling will generate more debate about and use of ‘telematics’ , a system which lets the car do the talking as the insurance premium is based on data transmitted from a mini-computer in the car which records speed , mileage, braking, cornering etc, without commenting on the driver’s age, sex or gender; or indeed on any other possible dimensions of difference such as class,religion or ethnicity.

This ruling on car insurance premiums is only the tip of the iceberg of course: the impact of removing gender as a criterion for establishing life insurance and pensions is likely to prove even more complicated and contentious.

Some of those cautious drivers have amazing longevity.
Don’t say: this isn’t the equality we signed up for
Do say: let the car do the talking