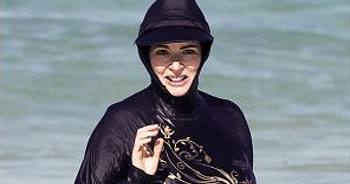 In a week when Osama bin Laden is found ‘hiding’ next door to a Pakistani military academy & a website is dedicated to the rear view of Pippa the royal bridesmaid…. the domestic goddess in her burkini on Bondi beach perfectly captures the zeitgeist.

So what is Nigella actually saying to us… is this a plea for multiculturalism or a specific protest against the burka- , niqab- and presumably also burkini-banning of President Sarkozy. Will she wear this in St Tropez?

More likely this is a protest against the tyranny of female swimwear and the general body- fascism which saw the wisteria sisters and their mother reduced to shadows of their former selves in order to slip through the gates of Buckingham Palace.

But body-fascism is good for burkini sales. The company – Modestly Active – which sells ‘modest swimwear’ (including Nigella’s) reports that 15% of its customers are non-Muslim….. and that was before Nigella took to the waves or the demise of Osama.