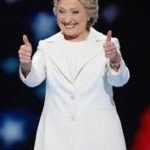 Hillary Clinton’s campaign to be the next American President has been a case-study in the complexities of contemporary “Feminism”.

Why have Hillary’s attempts to reach out to “women” often fallen on deaf ears? It seems that younger women, in particular, see her as too rich, too Establishment, too much the “wife of”, to be sympathetic to their concern for radical political change.

Has Hillary made too much of being about to be America’s First Woman President? Thus bringing the greatest nation in the world into line with over 70 other countries that got there long ago? Arguably, Obama has already trumped her (no pun intended) when it comes to US “firsts”.

Clinton’s Girl Gang of Second Wave feminists has made matters worse. Madeleine Albright repeated her well-worn observation that there was “a special place in hell” for women who didn’t support other women; which may or may not frighten the target audience into changing its mind. And Gloria Steinem, Grande Dame of Ms. Magazine, put her foot in her mouth by remarking that young women were attracted to Bernie Sanders because that was where they would find boys.

At the same time, the polls continue to show that Hillary is overwhelmingly supported by older women, who usually turn out to vote in large numbers.

Hillary has spoken out for women’s rights and gender equality at some global events, including the UN’s Fourth World Conference on Women in Beijing 1995, but is criticized for her actual record at home. Is she going to be pushing for ratification of the 1923 Equal Rights Amendment? And will the US abandon that select group of States (including the Holy See, Iran, Somalia and Sudan) who have not ratified the UN Convention on the Elimination of All Forms of Discrimination Against Women? Was she really channelling the Suffragette movement in that white suit at the Democratic Convention?

Perhaps she would be well-advised to play down her credentials in such a highly contested area as Feminism. The Elephant in the Room, aka Bill Clinton, due for reincarnation as First Gentleman (FGUS, if not FHUS or FSUS?), is definitely a mixed blessing.

Not to be outdone, Donald Trump has been widely criticized for sexist statements, and for attacking other candidates’ wives on grounds of their lack of pulchritude compared with Melania, who ripped off Michelle’s speech and ripped up her own CV. Another whole segment of political debate has concerned Trump’s alleged lack of potency, as evidenced by his very small hands.

You really couldn’t make it up?