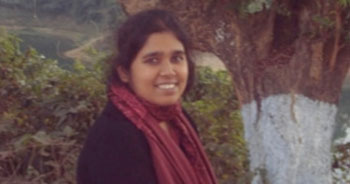 Shamima Pervin is a Women Rights activist from Bangladesh. Professionally she has worked with national and international NGOs, United Nations organizations, DFID and Government of Bangladesh.

She has carried out extensive work in planning, managing projects, capacity development and M&E activities in the field of extreme poverty, gender mainstreaming, diversity, violence against women, reproductive health and livelihood issues. She studied MA in Gender Analysis in Development at University of East Anglia and in Economics at University of Chittagong. She is a regular contributor to the English and Bengali dailies in Bangladesh.

Gendercentric: In the Asian region it seems that many women in political power have inherited positions from husbands or fathers. One wonders in such cases whether having more women in decision-making positions makes a real difference to lives of ordinary women, or is the effect largely cosmetic? And how does this phenomenon of ‘inherited’ leadership affect the impact upon the image of women in public life?

Shamima: Yes, the Prime Minister Sheikh Hasina and the opposition leader, Khaleda Zia both acquired their positions through inheritance. However, they both also made critical contribution by saving their political parties through uniting party members, as well as by sparing the country another military dictatorship. Both of them were the key persons in organizing the democratic movement in 90s. The people of Bangladesh consider them as the state leaders, not as mere women. Even the religious fundamentalist group publicly cannot protest against female leadership. In Bangladesh, even in rural area illiterate village people, both men and women’ do not protest against women’s leadership. They argue that as Hasina and Khaleda Zia can run the state, so women of grassroots level can run their Community Based Organizations. Because of their leadership at state level, nobody opposes female leadership publicly.

Gendercentric: Can you tell us something about Bangladesh’s experience with quotas & other ‘special measures’ to increase the presence of women in political life?

Shamima: Quotas and special measures helped to increase the presence of women in political life. Actually quotas were introduced in Bangladesh to face political realities of women’s life. It’s not easy for women to compete with men as the latter have more property through inheritance, muscle power, mobility and fame. In Bangladesh, money, muscle and male identity dominates politics. So, without quotas increasing women’s presence is difficult both at local level and national level. To combat the inadequate representation of women in the Union Parishad (lowest level administrative hierarchy), 3 seats are reserved for women, which are called reserved seats for women.

However, women are directly elected to these seats. Women’s acquisition of non-reserved seats is very negligible. Not even one percent. On the other hand women elected from reserved seats increased women’s representation at the local level. The same is true at the national level with the exception of the 2008 national election. From 1973 -2001 less than 4 percent women were elected in the general seats. The women who were elected were from the reserved seats they which gave them a springboard to the non-reserved seats.