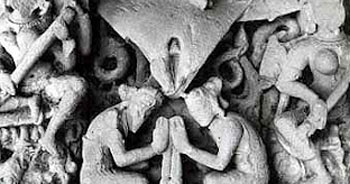 First a veneration for the heterosexually- induced vaginal orgasm, in a caring and candle-lit setting, as a source of a woman’s well-being and creativity.

This seems to eliminate from consideration quite a lot of creative people…. including… as Zoe Heller has pointed out…. some of the great names in English literature (Jane Austen, Emily Brontë) unless we have all been making the wrong assumptions. People who don’t have vaginal orgasms for a variety of reasons get short shrift. More damagingly for the author, Wolf’s latest book may also indicate that a rich and fulfilling sex life, such as she now enjoys, may have eliminated the need or capacity for creativity in other forms?

The two books (Fifty Shades & Vagina) share a similar line in euphemisms for the female organ: inner Goddess, Goddess-shaped hole etc though Wolf also strays into yoni (Sanskrit for vagina) territory. Wolf claims that when the vagina is subject to verbal abuse this causes creative, neural and physical damage. In a much-quoted passage, NW suffered 6 months writer’s block after a friend made vagina-shaped pasta for a celebration dinner, after she was signed to write the book in question, and called the pasta shapes ‘cuntini’. NW also hates the ‘awful’ feline moniker for the yoni .

The story is as follows: One fine morning in 2009 NW wakes up to the fact that despite a very arousing evening the earth has not moved. After a visit to her gynaecologist she discovers that she has a trapped pelvic nerve which is blocking the vital, two-way vagina –brain connection. Medical intervention and the services of a former investment banker turned male sexual healer (£100 per session of yoni-tapping; intercourse only indicated if ‘extremely therapeutic’) restore that vital link and Wolf today at 49 has ‘never felt more powerful or sexually alluring’.

In order to pad out this meagre story to full book length the author takes us on a number of detours: the first fifty-seven pages are concerned with a cultural overview of the treatment of yoni across history and geography; the Kindle version of the book (can’t be seen reading it you know) is still called Vagina: a cultural biography. This ‘beginning- with- the-Sumerians- and Babylonians etc’ mother-goddess –type analysis has already been done many times before by (other) scholars, and has really rather little to say about the position of normal women in those societies. See http://en.wikipedia.org/wiki/Mother_goddess for a quick taste of this type of cultural overview.

Wolf also indulges in a minor skirmish with the superiority-of –the-clitoral-orgasm fan club who she claims have treated the vagina as ‘retro, housewifey and passé’ .We await their response. Bits and pieces of neuroscientific research (dopamine and oxytocin, ‘the cuddle chemical’) are hauled in to support her views and experience. Even the ‘unique dimming of vitality’ of Sierra Leone’s women rape victims are introduced as evidence of the sacredness of the vagina. Presumably she counts these as ‘legitimate rapes’ unlike the ‘politically motivated’ charges of rape against Julian Assange whose cause she has been championing recently. The women who accuse JA should just have said ‘no’.

Wolf is after all the author of a very well-known text …The Beauty Myth … could we have expected more of her or should we have detected the deadly seeds of narcissism in that and other interim publications? In The Beauty Myth Wolf made the case that although improved education for women has made accessible some career rungs on various corporate ladders the continuing or renewed emphasis on female youth & beauty has meant that not only are women required to be intelligent, educated & competent in order to succeed in their chosen careers but they are also required to be thin, toned, and dressed to kill in tiny skirts and tall heels. Wolf has written ‘The more legal and material hindrances women have broken through, the more strictly and heavily and cruelly images of female beauty have come to weigh upon us…as women released themselves from the feminine mystique of domesticity, the beauty myth took over its lost ground…..the ideology of beauty is the last one remaining of the old feminine ideologies that still has the power to control those women whom second wave feminism would have otherwise made relatively uncontrollable…….. She also demonstrated that this is a game that can never be won, in the sense that if women meet the beauty standard they will be accused of having obtained their jobs on the basis of their looks. https://www.gendercentric.org/sex-a-gender/communicating-gender/dressed-to-impress.
Was this after all just an oblique way of saying ‘I happen to have it all…….. but don’t think it’s been easy’?

In closing and to borrow from Guardian Pass notes Format: Don’t Say: A very silly book by a very silly woman OR Has Naomi Wolf come and gone. Do say: More ‘celebrity’ than ‘feminist’.

Wolf’s earnest narcissism has provoked much ribaldry in her reviewers.

The following have excelled in double entendre: