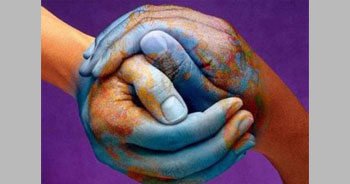 A call to have more women taking part in peace-making missions, in line with UN Security Council Resolution 1325 Women, Peace and Security (2000) is not being received with the acclaim that was probably expected. See comments to the Guardian article http://www.guardian.co.uk/global-development/2012/sep/20/harmony-women-peace-deals which also criticize the sainted Guardian itself for publishing the article without critical commentary.

The reason presented for including more women in peace-keeping and conflict resolution is that women make peace in their homes and communities on a daily basis but when it comes to peace-building and peace-keeping at international levels they are excluded. It is encouraging to see that this kind of argument based on the supposed essentially warm and cuddly nature of women is coming under fire from women and from men.

Of course there is a very strong argument for making peacekeeping teams balanced and representative. Peace negotiators are usually chosen from the upper echelons…. and retired upper echelons… of governments and international organizations where few women and other ‘minorities’ have yet to climb. Hence their inadequate representation on peacekeeping missions.

We can have very little idea at the moment whether all women will automatically be ‘better’ than all men and will bring a new element to the table at this level. Just as we don’t know whether women are inherently less corrupt… as is often asserted…… when they have so much less opportunity of abusing power.

Certainly peace-keeping missions need to be balanced in term of gender, and also in terms of ethnicity, religion, class, recent direct experience of conflict and any other dimensions relevant to a particular conflict situation. So simply adding more of those loving and empathetic women may not be enough.

The Associated Press in New York last week announced that during a meeting of the Clinton Global Initiative a 2 million dollar pledge to support UNSCR 1325 was made by the Institute for Inclusive Security in order to have women included in decision-making positions ‘at all levels of peacemaking and peace-building’. The new funding will be used ‘to deploy experts to work with government officials, legislators and civic leaders on issues including strategic planning and adding women to negotiating teams’. It would be interesting also to see a review of the current selection process and some analysis of which missions have been effective and why. Let’s hope that this intiative results in teams which are truly balanced and representative, and not just because they have equal numbers of senior and/or retiree members of both genders.