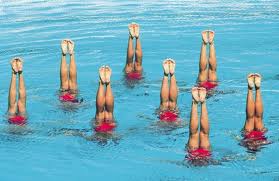 Do you remember Caster Semenya – winner of the World Championship 800m gold medal in 2009? The International Olympics Committee hasn’t forgotten her and is hoping to test ‘some women’ to prevent those with abnormally high testosterone levels from competing ‘as women’; and in principle one supposes to prevent men competing in women’s races at the London Olympics? The male synchronized swimmers may have been excluded on that basis?

After she won the World Championship 800m gold in 2009 Ms. Semenya has been undergoing so-called ‘gender testing’, but if gender is about nurture and culture then Caster Semenya is clearly a woman. She has been brought up as a girl and lives as a woman; she is considered to be a girl & a woman by her family and community; she was entered for, ran in, and won the women’s race in the Olympic stadium in Berlin on 19 August 2009. The testing therefore has been an enquiry into not her gender but her genetic & hormonal makeup.

As is fairly well-recognized humans have 46 chromosomes, of which 44 are composed of almost identical pairs. The other two are the sex chromosomes…..the X and the Y. Women have a pair of X chromosomes whilst men have an X and a Y. The Y chromosome is small and contains one small gene that acts as a master switch turning on the whole range of other genes that eventually give rise to a male body. Every human being contains essentially all the genes needed to build a body of either sex. Women also have the potential to grow a penis, a beard, to develop a deeper voice. We all have the basic genetic material to become either men or women .The ‘gender (or sex?) gene’ is important as it decides which other genes get turned off or on.

Babies in which there is a mismatch between the body’s hormones and those key chromosomes – estimated at about 1 in 15,000 – may be sexually indeterminate or ‘intersex’, and are usually assigned by surgery and medical intervention to live their lives as either male or female.
Interestingly enough one of the more common disorders has made beautiful women of babies who were technically born male. These women have XY chromosomes and if testing were limited to chromosomes would be declared male. They also have male hormones but those hormones cannot act because of a mutation in the protein to which they are supposed to bind. It is speculated that many tall slender models and film stars – even perhaps Marlene Dietrich, & Greta Garbo – have or had this condition.

Previous statements have suggested that Ms Semenya also has this condition having undeveloped internal male organs and the external organs of a woman. The International Association of Athletics Federations have previously declared that ’She is a woman but maybe not 100%’.
Caster Semenya is by no means the first or only woman athlete to have her testosterone levels & chromosomal makeup questioned. Are there male athletes who could test at ‘less than 100%’ male one wonders?

The IOC has long been preoccupied with the correct gender categorization of athletes. In the 1960’s female athletes were made to parade nude in front of physicians to verify the presence of appropriate genitalia and other external sex characteristics but process this might not detect a chromosomal intersex condition e.g. someone with XY chromosomes but female genitalia.
Ever fearless in pursuit of the truth, in the late 1960’s the IOC began testing for chromosomal makeup, and they are now further refining their search by testing for testosterone.

In the case of this year’s testing an American bioethicist – Rebecca Jordan – has stepped in to say that higher levels of testosterone alone do not produce better results for men or women, and that in any case it is hard to define what is normal as levels vary among people and within individuals according to the time of day & what they are doing. It is commonly assumed that bankers have abnormal levels of testosterone which is associated with risk –taking behavior.
At the moment the only Olympic sport at which men and women…. and horses of all sexes and genders….. can compete are the equestrian events of ‘eventing’ and ‘dressage’. The Olympics Minister Tessa Jowell made the rather misleading comment that this year that ‘every sport will have women participating in it’ by which she meant that finally this year women’s boxing will be allowed…that is to say women boxing women …though this has previously not been considered an Olympic sport. (Another first for gender equality is that the three die-hard countries which had never sent women to the Olympics- Saudi Arabia, Brunei and Qatar -have now capitulated and promise to send female athletes to the games).

Is there a case now for forgetting gender testing and organizing competitive events according to athletes’ record and performance level rather than according to gender? Since John McEnroe and Andy Murray have speculated that at best Serena Williams would feature amongst the top 600 male tennis players perhaps it would not make much difference? And this would allow in those male synchronized swimmers.

It would at last mean that you could not win an event on your performance and lose because of your gender.

P.S. Anyone who thinks determination of gender should be an easy process might like to visit www.hhmi.org/biointeractive/gendertest/gendertest.html or other similar interactive sites and see how s/he gets on!