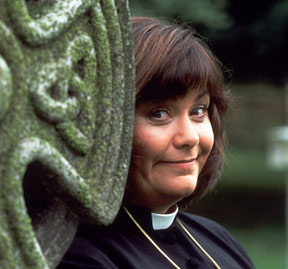 Perhaps it’s time for a flash-back to happier times; Dawn French, Richard Curtis -where are you? The BBC sitcom created by Curtis was explicitly designed to open hearts and minds to the prospect of women vicars.

We can do no better on this occasion than to cite wikipedia in full:
The Vicar of Dibley is a British sitcom created by Richard Curtis and written for its lead actress, Dawn French, by Curtis and Paul Mayhew-Archer, with contributions from Kit Hesketh-Harvey. It aired from 1994 to 2007. The Vicar of Dibley is set in a fictional small Oxfordshire village called Dibley, which is assigned a female vicar following the 1992 changes in the Church of England that permitted the ordination of women. The main character was an invention of Richard Curtis, but he and Dawn French extensively consulted the Revd Joy Carroll, one of the first female priests]and garnered many character traits and much information.

Let’s not also forget there are already women bishops in the Anglican Communion in Australia, Canada, Africa and among the Episcopalians in the US.

And…oh yes… the Head of the Church is a woman. (ERII)

May be time to bring back Richard Curtis and to recognize the power of the media… even of the BBC?
Read all about who voted and how :

And an analysis of why women voters might have lost the vote for women bishops:

And why it is significant that Prince Charles as and when he becomes King will describe himself as Defender of Faiths not of ‘the Faith’.